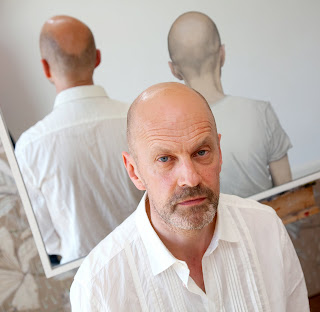 I was sitting in the office one day and there was a hint of a knock on the front door.. and a chap came into the office looking a little uncomfortable. He asked if we did 'websites and that sort of thing' I said that we could and that we did. And we started chatting. The man was Brian Shields, he lived round the corner from the office - oh and he'd just had a painting accepted by the National Portrait Gallery as part of the BP Portrait Awards. I found out later that there were over 2,177 entrants to the 2010 awards and Brian was one of the 58 'selected works'that form part of the exhibition that is appearing at the National Portrait Gallery until September 17th 2010 after which it will begin a national tour.

Brian asked if I could help him get a website up and running to try and 'make the most' of the publicity that would surround the show. Something simple just to show his work and where people could get in touch with him. At this stage I hadn't seen his work so he suggested that he'd bring his portfolio round the next day. Which he did - and I was hooked. Brian's work is amazing - beautiful colours, amazing subjects and an incredible intensity that makes it hard to draw your eye away.
We have put together a simple site for Brian - and it went live before the launch of the opening of the NPG exhibition. You can see his work at www.brianshields-artist.co.uk.
For me, I thank the day that Brian knocked on my office door. It has been a delight to work with him - and have appreciated his kind comments about working with me
'Dear Jo,
Just a note of thanks for all the envaluable work you at Frank! have done for me over the last few weeks.The web sites up and running and looking great.....hurrah!

Your enthusiasm,imagination and clear thinking were the perfect antidote to my indecision and technophobia(!) and now with the new gallery site I feel a renewed confidence in my abilities to progress professionally in my artistic career.

It's been a steep learning curve for me Jo but you made it fun,many thanks once again'

Actually Brian, the priveledge was all mine...

Photograph by www.aliciaphotographics.com
Posted by Jo Weatherall at 06:05

Thank you very much (not sure you're still blogging here or not). I've just been searching the net looking for Mr Shields pictures, having seen his portrait for BP this year. Unfortunately there's another artist called Brian Shields who obliterates the current Brian Shields from the net - at least I've found his website here.

Hi Sandy,
I am really pleased that you found Brian through my blog - (i know it was in February and it is shocking that I have only just responded). In my view the man is a genuius - have you seen the new work (the Clare project)?
It seems to be a bit easier finding Brian online these days - which is grand!
Have a good day.
Jo

Jo Weatherall
I am the owner of Frank! Communication Solutions based just outside Brighton in East Sussex. We are a straight talking, ideas driven creative communications agency. Frank! has a fantastic range of clients as well as being proud owner of www.woodingdeaninbusiness.co.uk, WWW.build14me.com and founder of www.un-networking.co.uk. Frank! specialises in helping charities, businesses and membership organisations engage with the people who matter to them. Do contact me for a chat if you'd like to know more. hello@frankontheweb.com